Tobermory Trail Race Weekend continued its tradition of hosting a community-led and strongly-supported event in Tobermory with the proceeds again being forwarded to the Primary Place Child Care Centre.  The event is put on by Peninsula Adventure Sports Association (PASA) which is a local non-profit promoting outdoor sport on the Bruce Peninsula, along with the help of a local committee.

Friday’s wind gusts created some challenges for the organizers, however with the help of committee members Ashley Salen, Sara Gowland, Tien Angus, Monique Wall, Terry Heffernan, Leigh Grigg, Tara Harpur, Sarah Peacock and Sheila Buckingham, along with extra assistance from race volunteers and key sponsors, everything was set up in time for the weekend.

The poor weather on Friday undoubtedly frightened away a number of racers entirely, resulting in 35 racers and 5 relay teams not attending the weekend.  However the event added 20 spots to last year’s capacity thanks to its close partnership with Parks Canada and a continued commitment to safety planning. Keeping the event environmentally sustainable is at the forefront of planning and the event this year ceased use of plastic cups.

Despite the gusty evening, a group of outdoor enthusiasts cozied up in the Community Centre for the guest speaker Shannon Miller listening to her fascinating talk on Adventure Racing.

Saturday morning saw the marathoners and relay teams start with PASA directors Tara Harpur and Leigh Grigg at 7am, subsequently producing a mad dash through downtown Tobermory.  The half marathoners were then brought to Cyprus Lake campground for their start at 8am.  From that point onward, as racer Jay Myatt succinctly put it, it’s “run time now.”

Despite some downed trees and the occasional (temporarily) lost racer, race weekend was relatively incident-free and plenty of smiles were found at the finish line street party.  After two years of fun activities along the pedestrian-only Bay St. the community knows now to bring along their kids to check out the exhibits.  Cheering on the finishers as they cross the line is always the most popular activity but this year there were inflatable Zoo Guts to compliment the bouncy castle and face-painting.  Saturday evening there were a lot of familiar faces at the Tobermory Brewing Company for dining, and at the Painted Turtles Silent Auction event at the Parks Visitors Centre.  There were racers literally everywhere you looked in town Saturday evening, even some who were due to be ready at 6am the following morning for the sailing to the Flowerpot Island 5 km run.

All finishing times in all divisions can be found on the website www.tobermorytrail.com and then by clicking on “results”.  An achievement that stuck out was Owen Sound’s Brian Dubeau and David White winning their third set of relay paddles after taking the relay division for the 3rd straight year. What made it unique this year though was that they finally beat the 4hour mark (finishing in 3 hours 53minutes and 53 seconds) although a minute later the men’s trail marathon solo winner Zack Reimer from St. Catherines also achieved the same feat, posting a 3 hour 54 minute and 35 second result. 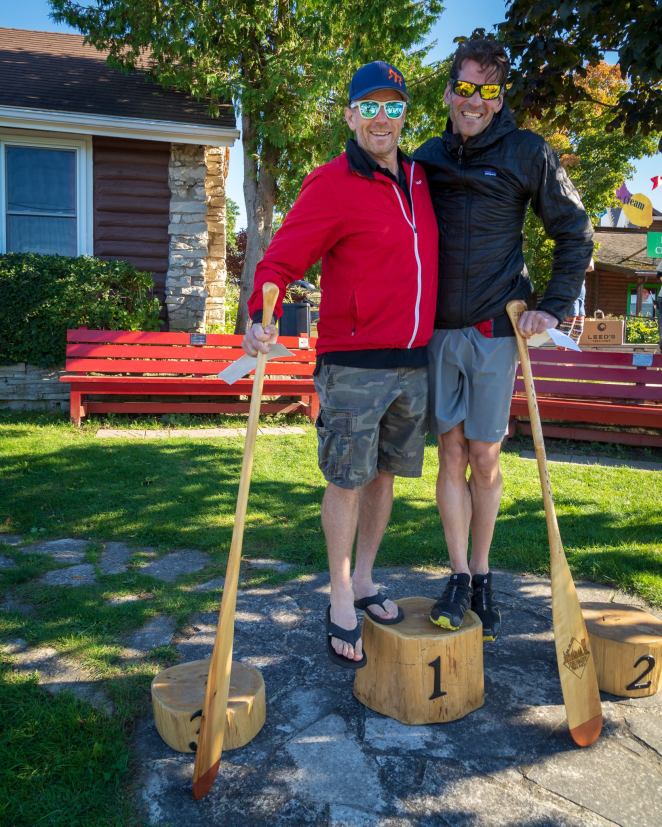 Brian Dubeau and David White on top of the Relay podium (again!)

Sunday’s 3rd annual Flowerpot Island 5K had fewer no shows than it’s counterpart marathon, so the new glass-bottom tour boat Blue Heron 8 had a lively atmosphere on its sunrise trip to the island.  Race director Tien Angus started everyone at 7:05am and finishers came into the Flowerpot lightstation not long after, the fastest of whom was Jake Harpur of South Bruce Peninsula, at 24 minutes and 1 second; a three-peat victory for Jake.  Lola Bater, a track and XC star from Kitchener, posted a 28min 59sec result to claim the women’s title this year.

The Friends of Bruce District Parks provided an incredible breakfast after the run, complete with hors d’oeuvres of every popular breakfast treat from waffles to quiches.  The awards were handed out at the Blue Heron dock with each racer receiving a medal and a Tobermory stainless steel water bottle.

In total, 230 racers and approximately 75 volunteers took part in the weekend, each of whom received a treat from the Sweet Shop, a hearty meal (Leeside’s brown bag lunch for volunteers) and a commemorative t-shirt.  Keeping proceeds local and providing a great race experience is what PASA does in close consultation with Parks Canada, and the event couldn’t have taken place without the generous support of Bruce Peninsula National Park and Fathom Five Marine Park.

The organizers would also like to thank the Peninsula Bruce Trail Club, the Friends of Bruce District Parks, Leeside’s Restaurant, the Blue Heron and all the other partners and landowners who donated cash or prizes or simply time and effort to help make the 3rd annual TTRW a success.

2018 will mark the 3rd edition of the challenging & uber-scenic Tobermory Trail Race Weekend.  Saturday September 21 will be the Trail Marathon, Relay and Half Marathon and Sunday September 23 will be the Flowerpot Island 5K.

The public will get access to both these dates on Sunday January 21st at 10am at http://www.tobermorytrail.com

Please note:  Although the event sells out quickly, it’s important to know and research its level of difficulty BEFORE SIGNING UP.  These racecourses take place on VERY CHALLENGING TERRAIN, as described here.  Please be honest with yourself, and with your capabilities, and sign up for the distance you believe you can complete in the allotted time.  Cutoffs for 2018 have not been announced but will be similar to 2017 cutoffs. 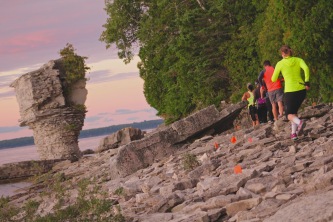 NEW THIS YEAR: Trail Marathon Relay teammates may be added or changed until August 25th for no charge.

Thanks to Parks Canada, Blue Heron Company and Leeside’s Restaurant and other partners for their incredible support.