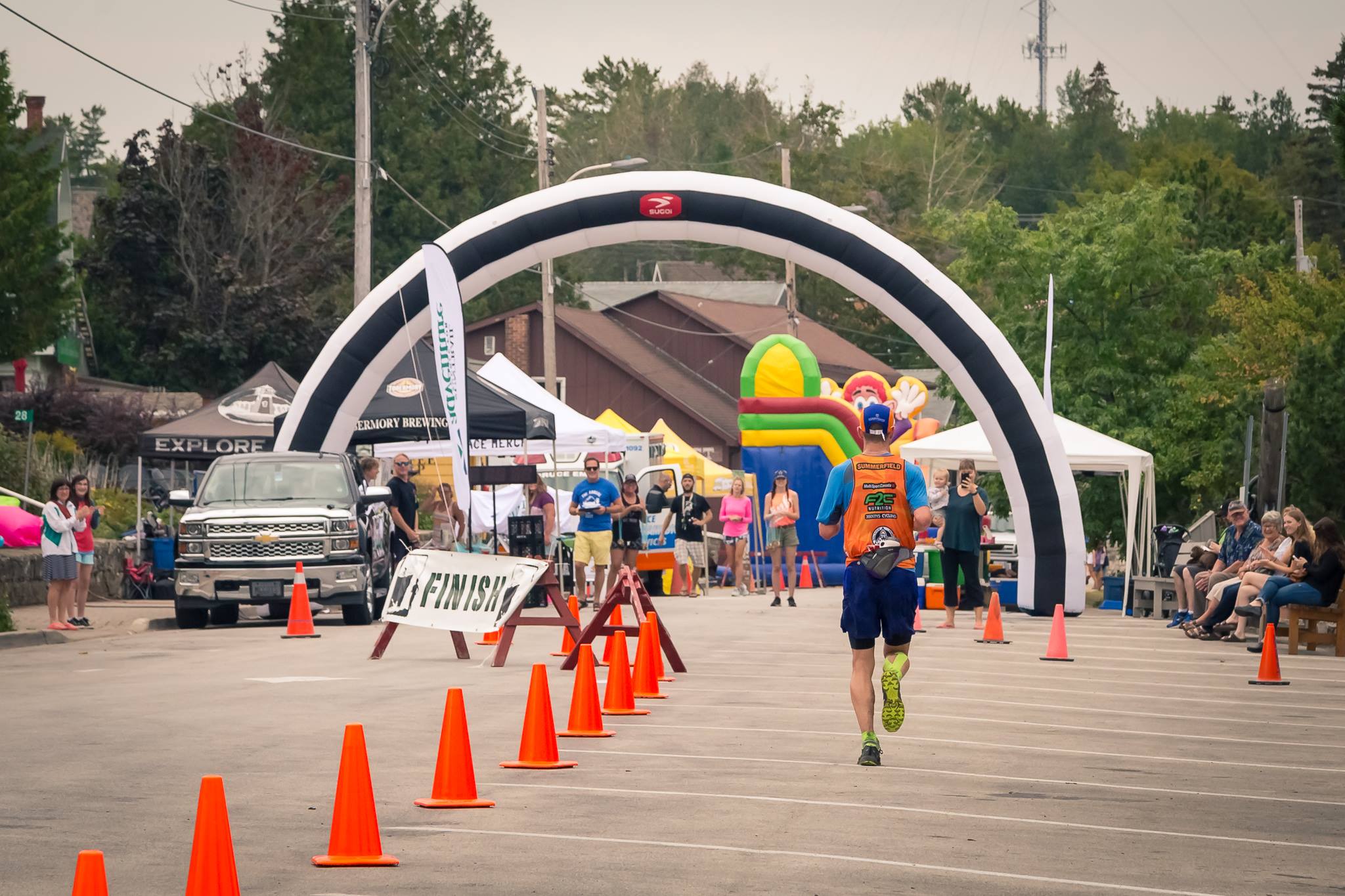 The Tobermory Trail Race Committee would like to thank everyone – racers,
volunteers, and sponsors – who helped to make the 2nd annual Tobermory Trail
Race Weekend a smashing success and helped raise money for local causes.

After a delicious pasta dinner, provided by the parents of Primary Place Daycare, 120 racers headed out early Sept 23 to tackle one of the toughest runs in Ontario. The course progressed mostly on the Bruce Trail through Bruce Peninsula National Park between Cyprus Lake and Tobermory.

At 7:00 am, accompanied by Kathryn Hauck on bagpipes, the 28 Marathon and 9 starting Relay racers were escorted to the start line on Bay St.  After cheering them on, the 82 Half Marathon runners loaded onto buses to head to their start line at Cyprus Lake. The rain the previous night combined with the humidity making temperatures reach well over 30 degrees Celcius made for a slippery hot run. Everyone was very careful to run within their abilities & the safety team was called on only a handful of times to coordinate aid for racers.

These are amazing accomplishments but the talk of race day was Benjamin Jagdeo, who is just 12 years old and running with his teachers.  He finished the Half Marathon in 3:49:22, apparently high-fiving fellow runners all the way.

The amazing weather continued on Sunday morning when, in the still greyness of
dawn, 73 racers were transported by the Blue Heron Company to Flowerpot
Island to compete in the Flowerpot Island 5km race.  Jake Harpur (aka. Jack Van Dorp) retained his title of Flowerpot 5km winner.  Steven Forrest, Mary Thompson and Lisa Wardell were the other category winners.  Of note Steven and Lisa were just two of a group of racers who competed on both Saturday and Sunday!  The dedication of these athletes is extra impressive.

At the finish line of the Flowerpot Island 5K, the much sought-after Friend’s breakfast did not disappoint.  Have a taste for yourself with this Youtube clip: https://www.youtube.com/watch?v=rYti-_GJpL4

The purpose of these events is to draw tourism in the off season, fundraise for the Primary Place Daycare & the Friends of Bruce District Parks, and share our amazing trails and natural environment.  The event raised over $10,000 for the daycare this year, plus an additional $4,000 for outdoor sport ventures via PASA.  By this bar, we consider this weekend a huge success and look forward to planning next year’s run.